Remember those Pee-Chee folders you’d stuff your math notes in? And how they usually depicted young high school students playing sports or doing other school related activities? I vaguely remember them, but I bet it brings back memories for many Americans who grew up in public school systems. 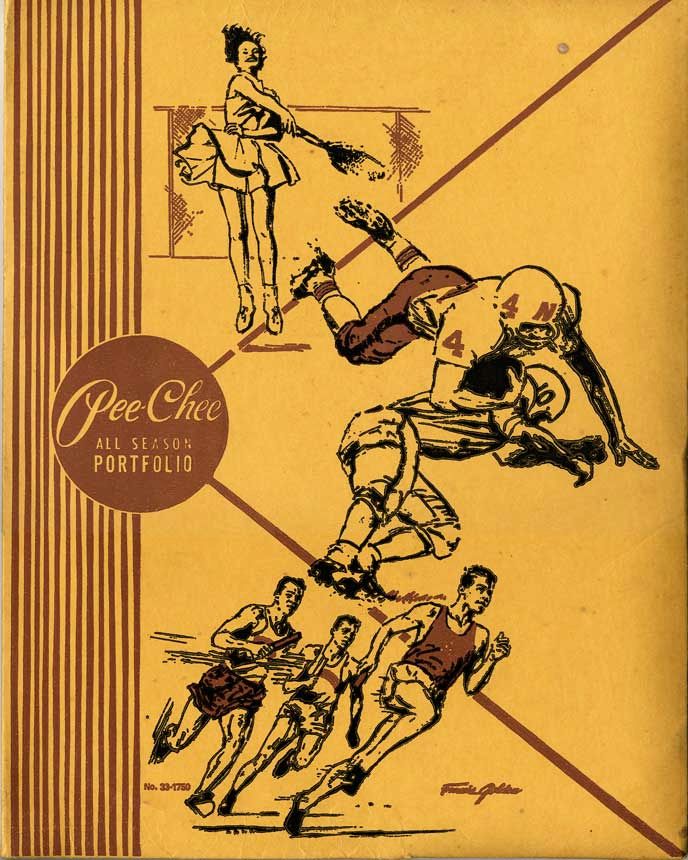 Original cover of a Pee-Chee portfolio.

These Pee-Chee folders were first produced in 1943 and immediately became a common American stationary item up until the early 2000’s. The illustrations were done by artist Francis Golden, who was best known for his watercolors of fishing and hunting. It is no secret that defacing these illustrations became popular among young adult students. It’s what they do best! But one artist is taking these classic illustrations and giving them a new socio-political context. Meet Patrick Martinez, a Los Angeles-based artist born and raised in the San Gabriel Valley with a diverse cultural background (Filipino, Mexican, and Native American). Through his artworks that span a wide variety of media (painting, neon, ceramic, and sculpture), Martinez colorfully examines otherwise everyday realities of suburban and urban life in L.A. with humor, sensitivity, and wit. Take for example his piece titled, The Most Violent Week in America (2016), an 8’x5′ piece that at a glance looks like the covers of the classic Pee-Chee folders, but when closely examined, you start to notice that the figures are involved in acts of violence. The Most Violent Week in America, 2016

In the top left corner of the painting, you can see the portrait of Castile, who Martinez felt the need to commemorate above all else. In the top right corner, Villaneuva sits on the bed of a pick-up truck holding a guitar, as he did in a photo that accompanied news reporting of his death. Underneath that, Martinez recreated the image of Sterling shot by an officer. Along the bottom, he painted police scenes from Dallas. Martinez has been documenting these instances of social violence in the U.S. since 2015, mostly depicting police brutality and death at the hands of police officers in Pee-Chee style paintings. But his first Pee-Chee piece was in the form of a screen print back in 2005, where he depicted cops chasing a person, pushing someone, and running with an armed gun. He showed this work from 2005-2007, then put the idea aside. All American Class of 2016, courtesy of the artist and Charlie James Gallery, Los Angeles.

Pan to ten years after his first screen print, and we start to see how technology drastically changes the way news is reported and distributed. For the first time in history, people could use their cell phones to document any acts of police brutality, and upload photos and videos to sites like Youtube and other social networks. This allowed the general population to witness firsthand the violent and sometimes lethal force that has been used in cities across the country. After the deaths of Eric Garner in New York and Michael Brown in Ferguson, Missouri, Martinez says he felt compelled to revive the Pee-Chee concept. “I had reference now,” he explains. And as the news cycle continued to turn out stories of one tragic death after the next, Martinez continued to paint. “There was always content,” he says.

But Martinez also looked to the past for inspiration. In “Nine Deuce,” he recalls the beating of Rodney King and subsequent uprising in Los Angeles, using Lakers shades of purple and gold. In “Vintage Throwback Po-Lice,” he pays tribute to Ruben Salazar, the Mexican-American journalist who was killed inside an East Los Angeles bar when he was hit by a tear gas canister on the day of the Chicano Moratorium march in 1970. Martinez plans to continue making more of these “time stamps,” as he describes them, “It’s just something to record history and present it in a creative way.” And in addition to recording history, Martinez adds that it is also a way to preserve the memory of those whose lives were cut short. “I want to represent everybody and have their story at least be acknowledged,” he says. “That’s why I’m doing a lot of them.” The “valley girl,” like the Valley itself, cannot be contained in a stereotype. However, it can be argued that any Valley Girl’s sense of self has been informed by the cinematic ideal imposed on them. In fact, with little effort one can see that the “valley girl” has left an indelible mark on the global identity of womanhood while only representing a small minority. This exhibition endeavors to look past the myopic lens of popular culture that created the “valley girl” and delve into the true identities and diversity of Women in the Valley through the contemporary artwork they produce.

A new exhibit at the Brand Library and Art Center has been causing quite a buzz in the L.A. Art scene. This exhibit includes artists such as the famous Judy Baca, Rachel Apthorp, and Christina Ramos.

Ever since the 1983 film, the stereotype of a valley girl has been pretty distinguishable. For example, saying “like” after every other word and being noticeably white while doing so. But in this exhibit, you learn that it is not all about that. It gives you a glimpse at the many diverse stories that these contemporary artists have to tell, from growing up in the barrios of the valley, to making a place your new home.

One of the special highlighted pieces in the exhibit is the 1975 portraits of Judy Baca by filmmaker Donna Deitch. In these, Judy projects the Pachuca character that she so feared from her childhood growing up in Pacoima. “Walking with their arms linked in full makeup, ‘ratted hair’ and ‘raccoon eyes’, the girls commanded the streets and the school yard of Pacoima Junior High School where I went to school.” She mentions whenever people saw them, they would step aside because they represented the image of powerful, dangerous women, which she so much aspired to be. The reason she chose these pieces was because the “Pachuca” is a woman of color from Pacoima, who is the counter narrative to the “Valley Girl”. Another series of paintings that you’ll find within the exhibit are the paintings by our very own Acrylics instructor, Christina Ramos. In her artist statement, she talks about her experience growing up in Sunland. “I was surrounded by horses and other livestock,” she mentions, “I think people always associate the Valley with the city of suburbs, when in fact there is a lot more rural areas on the outskirts of the town.” In the painting above, her daughter and her chicken, Frida, can be seen painted in profile, mirroring the master painting Whistler’s Mother (1871) by James Whistler, which hangs on the wall in the background.

You can catch this exhibition running from January 26 – March 22, 2019 at the Brand Library & Art Center, 1601 W Mountain St, Glendale, CA 91201. There is also a Pop Up ZINE Newsstand curated by San Fernando Valley Zine Fest, featuring over 30 zines with Valley-centric, female-centric, and intersectional content.